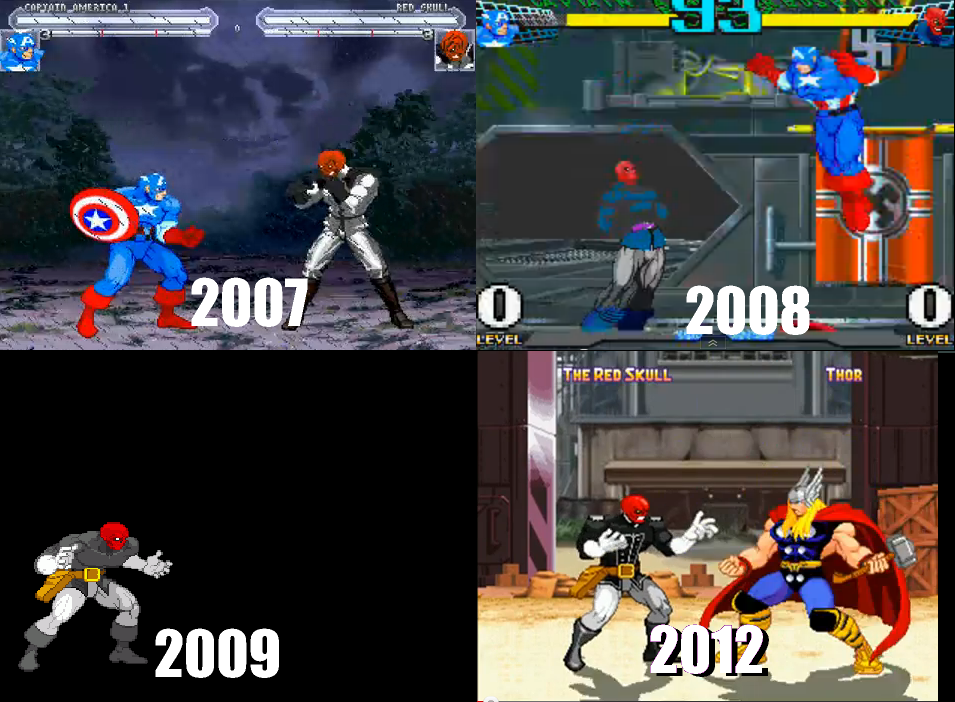 It was my first wip ever.

I started out in this mugen warehousing place called "The Hidden Elect" (offline) where we shared leaked and stolen characters for mugen Posted Image, rare stuff at that time to.

After working on a Conan the Barbarian animation I got to work on Red Skull with an admin/coder named Zodiac.

After seeing the results I wanted to make a detailed version but somehow it turned out worse in 2008. I may have released this one somewhere on esnips?

So i decided to go for it one "last" time in 2009 with a traditional base. This one was private and only a few had it. Arkady did a custom edit of it with a lot of stuff.

Anyway, the wip was lost on me when my PC crashed. Luckily though Volzilla saved it and sent it my way. Once I had it back i decided to enhance to the 2012 version after doing stuff for DBZ choujin/stig, Mortal Kombat Mugen, Spider-man, marvel/DC, Street Fighter, Originals, and stages.

The moral of the story is if you really love something you should do it...even if it takes...

Similar topics
» Toonstruck 2 will be released if you want it bad enough!
» Perfect 2015 books are released !
» Les Miserables is now freeware (and A Tale of Two Cities is now released)
» Jonathon Boakes and The Last Crown
» Clandestiny for the MAC and iPad, hopefully for PC later.